2020. The year of flux and disorder. Of isolation. The year the world was forced to recede with the ebb of a global pandemic. 2020. Don’t type it; pick up your pen and feel the motion of these numerals, feel how the line itself becomes fluent as it swells and breaks and swells and breaks, a continuous tide…

Early in January, about two months before the flood of the current times was dominating our local consciousness, I found myself in deep introversion, delving around to find my way forward of retuning my life, of redirecting my course towards what I felt is my innate purpose – a life dedicated to art, and the pursuit of painting orchids. This particular morning dark grey clouds amassed overhead, casting their shadows over the not too distant mountain peaks. The sky was an intriguing display of scattered light rays thrusting their way through dense shades of soft grey down. Patches of cobalt skies revealed the ripe summer’s morning, contrasting with distant brushstrokes of rain smearing down onto the lush, velvet green valley, warning of their predicted downpour. For a congregation of avid orchid enthusiasts, such a threat is mere encouragement to speed up the search, to venture further around the foot of the Drakensberg to see what treasures are to behold.

Small groups of individuals were casually assembling, like-minded spirits mingling together. I merged with a small group of ladies, and we ventured off on our search. Minutes into our stroll we could already start to identify a variety of species. Disas, Satyriums, Eulophias and Neobolusias started appearing, peeking out their colourful and peculiar little heads from behind thick grass clumps, almost as though they too were curious of our whereabouts.

The terrain became a little rougher. More rocks. More thicket. More sludge as the valley started revealing its curving streams. Guided by one of the experts amongst us, we were directed to a slender brook. Carefully I chose solid patches of vegetation that would carry my weight closer to the water and found a natural path to cross over. An unsteady hop of a rock and the crossing has been done. The immediate slope I faced had such a steep incline, that it had to be climbed upright. You find a dense grass clump to hold onto, step against another, and push your way up the vertical sludge, only hoping nothing gives away. After a few slippery climbs, I suddenly found myself encircled by the tiniest little orchids. Daintily they grew from the slope, pearly white skin freckled with pinks and purples and many shades of it – yet so discreet in appearance, that their presence was a mere whisper.

The precious find was Disa oreophila subsp. oreophila. Its name, oreophila, is derived from ancient Greek, literally meaning “mountain-loving”. It is endemic to the area where it can be found growing against mountain slopes. So, there it was, inspiration trickling from the moist slope, in a scene too ethereal not to inspire.

After a few rough sketches and the scramble back down the slope, I was secretly commissioned on the spot to paint the magic of the moment. It would be for the 70th birthday of our group guide’s husband. This particular couple, Richard and Julie Braby, has had a beautiful and passionate involvement with the mountain and all its wild flowers. When first realising that there are terrestrial orchids, Richard became obsessed with them, leading him to write the field guide “Wild Orchids of the Southern Drakensberg” in 2019. It is a compilation of information from 12 years of studying, identifying and photographing orchids of a 30 km strip of the area’s mountain. He particularly loved the Disa oreophila because, in his words, they are “so delicate and beautiful and comes in so many shades of pinks”. The current season’s discovery of a whole colony of variegated flowers has made an immense impact on the Brabys, as previously they have only found and witnessed singular plants.

Even though the original flowers were captured in paint almost immediately from a sample of the fresh material, the process of painting the entire illustration happened organically over the duration of about 6 months, most of that time coinciding with our national lockdown. The scene itself slowly grew across the paper over time. Bit by bit strands of grass pushed out from the soil, moss appeared as crystalline speckles sprouting from the moistness. Patiently fractal rhythms carved paths over the rocks. It was quite unlike my familiar “style” at the time, perhaps facilitating a crossing over into a new phase. The background was almost given dominance over the actual orchids, thereby absorbing the scene. With the absence of any intentional constructive techniques of composition, the picture, in a way, became an orchid hunt in itself, one which has the potential of guiding the curious eye to slow down, to search a little deeper.

I am hoping that the scene in all its clutter and lack of stillness would capture the imagination of the viewer. I hope the balance of life and decay can instil some silence that is an escape into a more organic sphere, a reminder of a bigger cycle that can sometimes be discovered in the most obscure detail. To the new keepers of this painting: may the scene transport you back to the heart of what you love, and may your memories be endless. 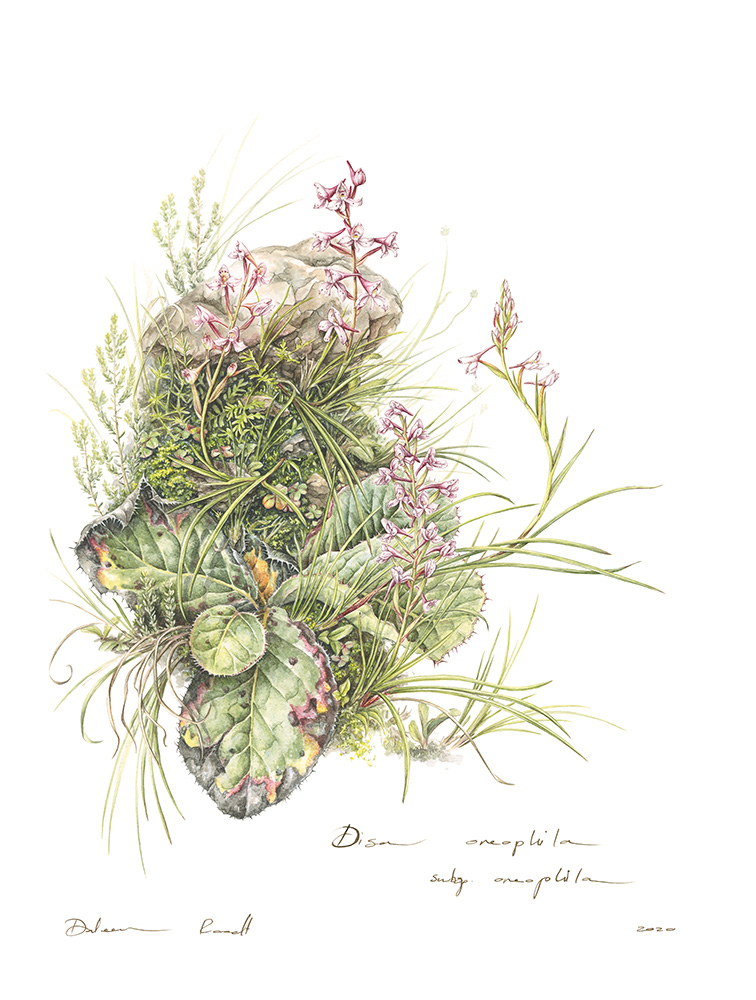 Posted in Flowing From My Brush, Orchids