When first commissioned to paint two watercolour illustrations of endangered wildlife species, I knew that it was going to challenge my usual painting methodology. The request came from a longstanding client for whom I’ve been painting indigenous tree and bird species since 2012. This year they requested the Ground Pangolin (Smutsia temminckii) and African Wild Dog (Lycoan pictus). Even though animal wildlife is not one of my major themes, I was excited to expand my repertoire.

As far as flora is concerned, I am fairly particular about working from live plant material, as opposed to working from photo’s. This is the best way to get a true sense of depth and dimension, which is crucial in order to convey something of a similar “real” quality on a two-dimensional surface. How else can the detail of a tiny flower be observed, the fine hairs and speckles as they appear and continue their spirals around a delicate stem? What better way for the brain to register texture, other than by a soft touch? This hands-on interaction with my subjects has always been an essential part of my process. So, when it comes to having to paint a wild animal, particularly one which is extremely scarce or threatened, the dilemma I face, is that I can’t exactly ask the carnivore to “sit down” next to my desk in order for me to stroke its tail…

I was fortunate enough that a friend who is very proficient with wildlife photography kindly offered that I could use some of her high definition photos of painted dogs to construct a unique composition. It was not hard to fall in love with the lush marbling enrobing these animals. The texture of their beautiful fur coats very much resembled for me the texture of a bird’s feathers, and it felt like pure indulgence to recreate this effect in watercolour. Like a royal coat threaded with hair-strings of pearl, charcoal and golden ochre, the gorgeously unique spots and patterns allowed for layers of pigment to build up a luxurious intensity. Careful attention went to the eyes, in pursuit of a connection to these threatened souls. 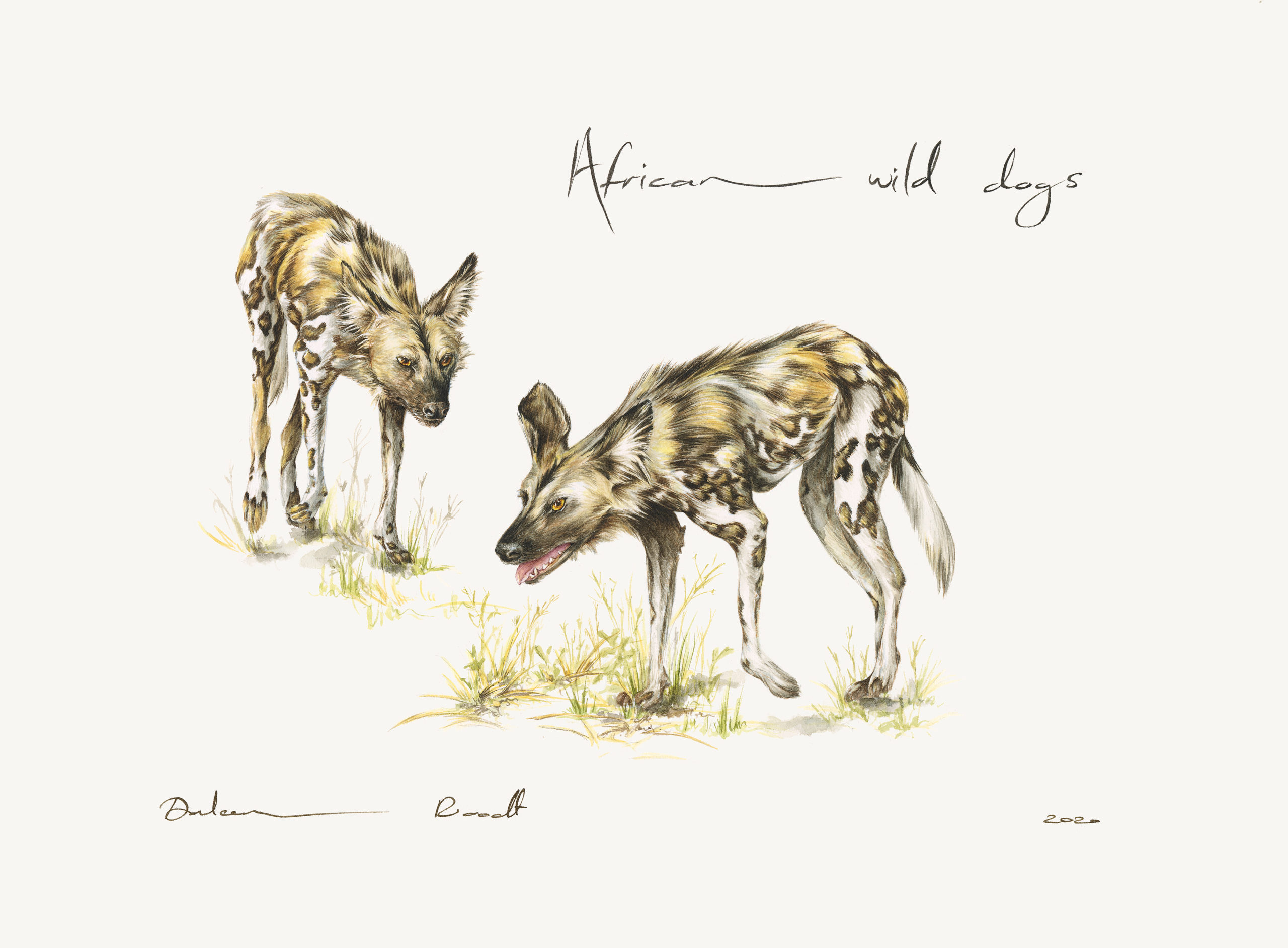 When it came to the pangolins, I was more challenged in finding sufficient media to work from. I didn’t simply want to copy a pre-existing web photo. The only way of getting to know how these peculiar creatures move, how they breathe, how their finely grooved armour of scales glide in seamless motion, was to watch hours of videoclips, thereby acquainting myself with as much character as has been captured on film, and then constructing a unique composition from the available information. This journey revealed shocking insight of their unfortunate exploitation on the illegal trade market. There is a sad vulnerability that surrounds these beautiful creatures, but I wanted to communicate hope by portraying a mother with its young. 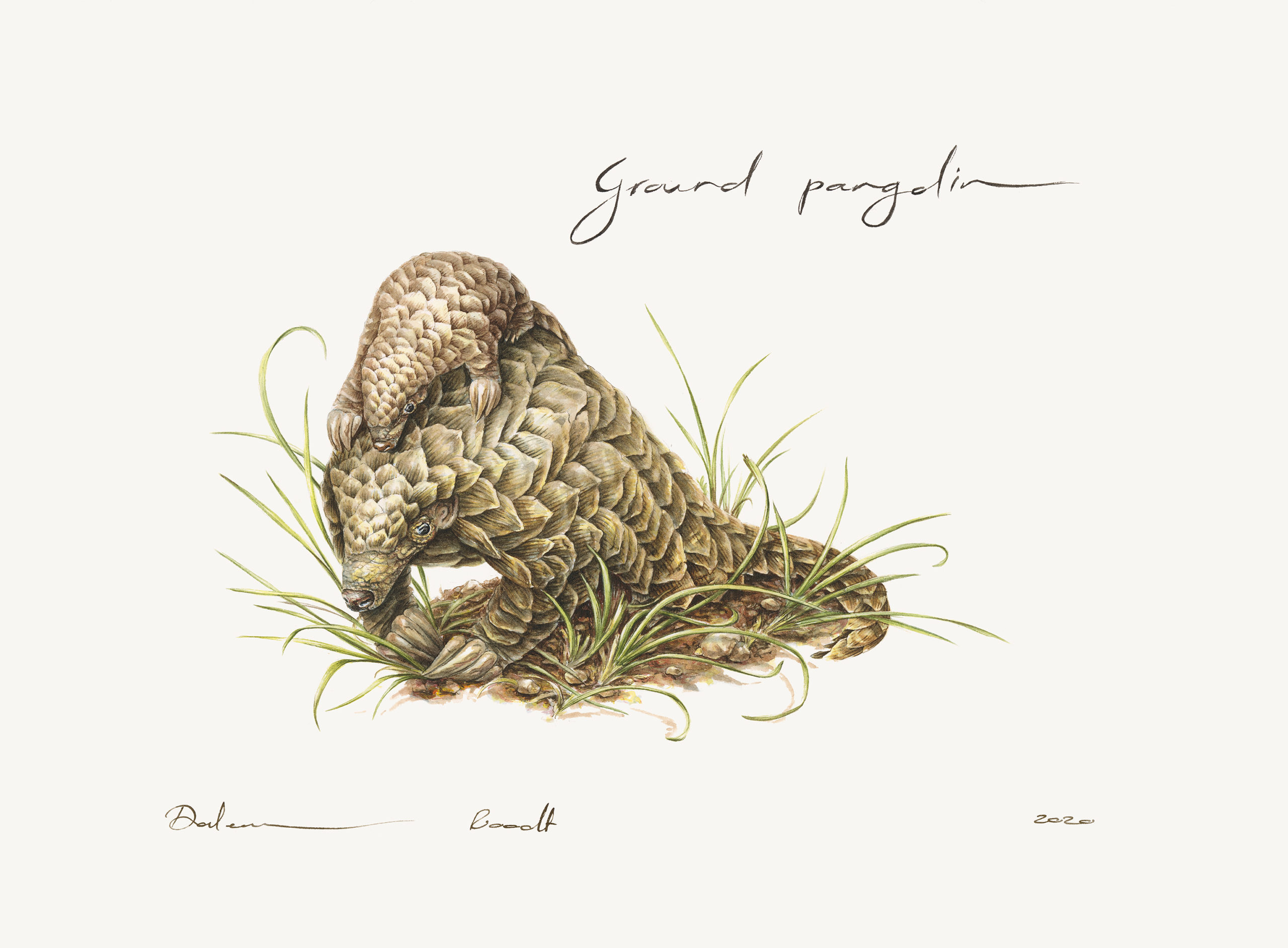 Both of the subject species have been in the limelight of late because of their threatened status of existence. The African Wild Dog, also known as the Painted Wolf, is South Africa’s most endangered carnivore. The packs, roaming plains and sparse woodland of sub-Saharan Africa, are threatened by loss of habitat due to agriculture. They are also unnecessarily hunted by farmers who fear for their livestock. Pangolins, on the other hand, are currently the highest trafficked animals on the planet. Their scales are used in traditional medicine and they are hunted for bushmeat and illegally consumed as a “delicacy”. Even though pangolins may appear tough and well armoured, these secretive, nocturnal mammals have a very fragile existence. Little is known about their habits and behaviour, but the shocking discovery of their gruesome exploitation is a living nightmare.

I felt deeply touched by the newfound awareness of the endangered existence of both these species. I wanted my artworks to have more meaning than mere illustration, to have some sort of contribution to the conservation of these animals. That’s when the idea was borne to sell art prints as a fundraiser initiative.

The proceeds had to be donated to an independent organisation, one who has integrity in management of their funds as well as having the right legislation in place; very specifically, it had to be an organisation involved with both wild dogs and pangolins. The Endangered Wildlife Trust (EWT) ticked all the right boxes. With their “Carnivore Conservation Programme”, they run large scale projects to re-establish, maintain and expand safe habitable space for threatened carnivores including wild dogs, with one of the aims being to ensure positive changes in human-based interactions. Furthermore, EWT’s “Wildlife in Trade Programme” is targeted at reducing trade-related threads to the survival of species including the pangolin. They implement projects that not only aim at prevention and detection, but also at the capabilities of the criminal justice system. They are a reputable organisation whose efforts have received local and international awards, but more importantly, are making a major positive impact on the conservation of many species and environments.

A limited edition of 50 certified, high-quality archival prints of each illustration have been made. All proceeds from the sales will be going directly to EWT, specifically contributing to their projects relating to wild dog and pangolin conservation.

The indelible impression of these beautiful creatures has truly inspired me. It is my hope that my art will play a small role in the efforts to ensure the survival of these species. For your contribution, and to purchase your unique limited-edition print, please clink here. To life… and its continuation.

Posted in Conservation, Flowing From My Brush