Fate, chance, purpose, a predetermined divine plan…how often do we experience seemingly acausal happenings that form part of a picture much bigger than what we can imagine at the moment of its occurrence. This may be what Jung would have described as a synchronicity, or “meaningful coincidence” – a seemingly chance incident that essentially holds a bigger connection to one’s life journey. Not to give my involvement in the particular event of which I’m about to write too much importance, but perhaps simply recognizing and welcoming it as something that held a bigger significance than I initially realised, and, in turn, fits perfectly into this deep-seated desire to seek out and paint indigenous orchids. This is the brief story of my chance encounter and acquaintance with the precarious existence of the Albertina Sisulu Orchid, previous known as Brachycorythis conica subsp. transvaalensis. A mouthful.

One afternoon in 2014 I decided to make a quick, unplanned visit to the H.G.W.J. Schweickerdt Herbarium at the University of Pretoria. I was in the area and decided to go drop off some scientific illustrations. Walking past the wooden cabinets emanating the familiar smell of old books and preserved specimens, my attention was caught by a perky orchid inflorescence standing in a glass of water. A collector had brought it in that morning, and it was lined up to be preserved later that day.

An immediate excitement was stimulated within me, and I begged to borrow the beauty in order to pin her down with the tip of my brush. With the delicate specimen awaiting its apparent termination, my time was limited, but I was kindly allowed to indulge myself and immediately set out to create a painting. 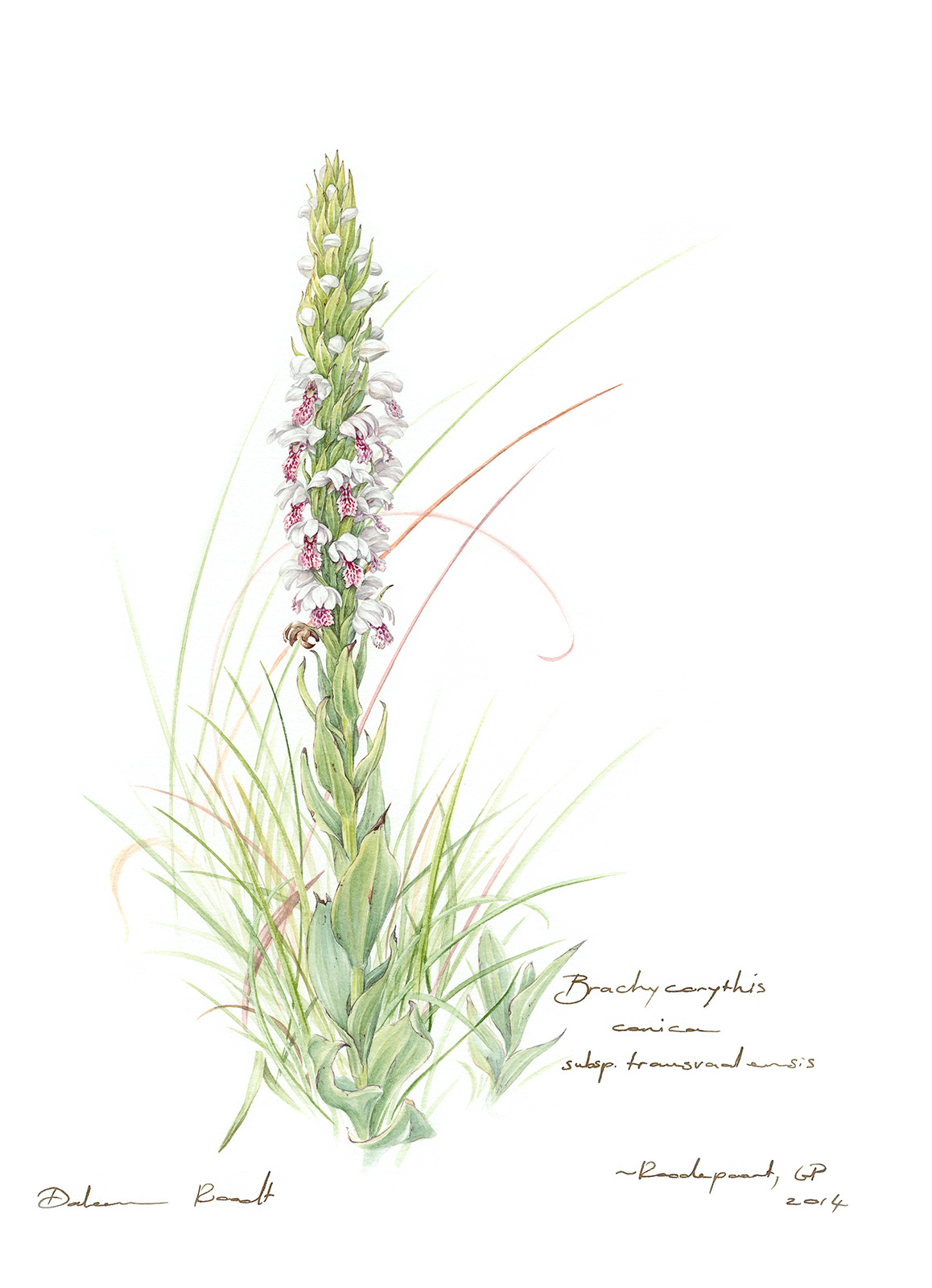 So perhaps this is a good time to point out the uniqueness of the situation, this “synchronicity” that I want to claim. With every single orchid that I have ever painted, the act of finding the plants has always been initiated by me – whether this be a hunt for a specific species, a general expedition to find whatever is to be discovered, or a request to borrow or be provided with specific samples from collectors and enthusiasts. The difference with this particular subject, is that I had no intention of finding it; on the contrary, it unashamedly presented itself to me in an apparent chance meeting, hours away from its demise.

The significance soon became apparent when I further acquainted myself with this delicate little orchid. Brachycorythis conica subsp. transvaalensis forms part of a population of orchids that are now classified as critically endangered. From a previously known 16 locations, there now remains only one known viable colony in a single location, on the Proteadal ridge on the West Rand that also happens to be the hunting ground for the majestic Black Eagle, a major tourist attraction in the area. At the time, despite an appeal by the Proteadal Conservation Association, the decision that granted authorization to develop around 3 000 high density residential units on a portion of the Proteadal property still stood, but to great relief was overturned on the 31st of July 2019 when made an order of the South Gauteng High Court. The area with all its protected wildlife is now safe from development. This has been a major victory for conservation in South Africa.

But let us move back a few years to 2016, to the first WOSA (Wild Orchids of Southern Africa) Conference, that I happened to attend. Here it was first proposed that one way of helping to save the plant was to popularize it and get the public to relate to the orchid, which could be achieved by a name change. It would soon become the Albertina Sisulu Orchid – named in honour of the wife of apartheid stalwart Walter Sisulu (1912—2003). The decision also seemed significant, as the location where this rare orchid grows practically borders the Walter Sisulu National Botanical Gardens.

The naming of this rare orchid to the late Albertina Nontsikelelo Sisulu (1918—2011), also known as Ma’ Sisulu (“Mother of the Nation”), seems to have more significance than mere coincidence, which I will mention here in brief (For full article, click here).

Albertina Sisulu was born in 1918, the same year in which the Brachycorythis conica subsp. transvaalensis was first discovered west of Pretoria. Although the orchid went through a few name changes in the classification process, it was first published as a separate taxon in the Kew Bulletin in 1955, the same year Albertina Sisulu joined the ANC Women’s League and partook in the launch of the Freedom Charter. She was one of the organisers in the historic anti-pass march to the Union Buildings in 1956 with 20 000 other women, an event that put women on the forefront. That was the same year in which the orchid was last recorded. A few decades of struggle that followed suggest that, just as with many of the apartheid activists around the time, the orchid has also “gone into exile” (Wodrich et al, 2018). The orchid was not seen for another 51 years, until a chance discovery in 2007 by Andrew Hankey, in the only currently known location. This was a mere 4 years before the sad passing of Ma’ Sisulu – challenging years signifying an unfortunate struggle for survival for both parties. 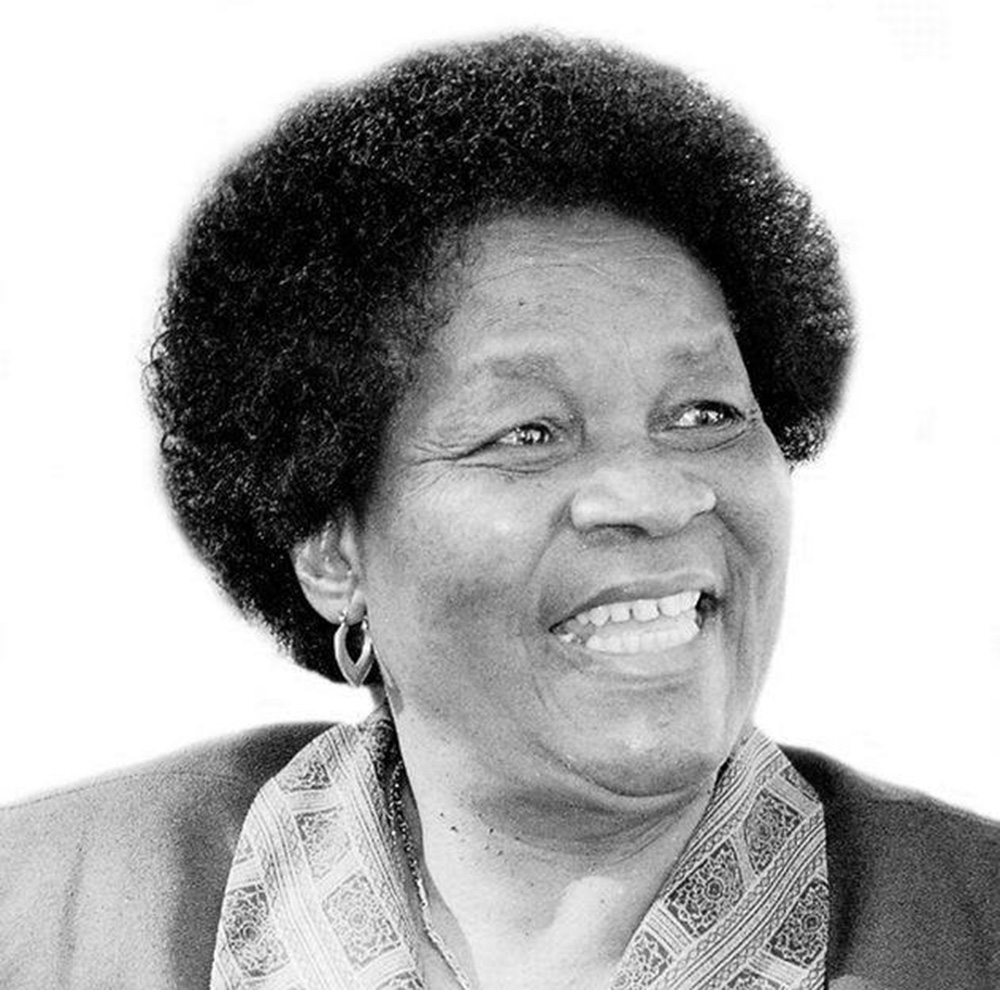 Back to the illustration – after the 2016 WOSA conference and discussions of the orchid’s fate, I was honoured to be asked that my painting is used as basis for the official logo that is now synonymous with the conservation efforts of this orchid. The official naming of the orchid took place on the 10th of July 2018 in a dual centenary celebration – the naming of the Albertina Sisulu Orchid that was now exactly 100 years old, as well as the 100th birthday commemoration of Ma’ Sisulu! On the occasion, the Sisulu family was presented with a framed, limited edition archival print of my painting containing the following plaque:

Some of the prints (limited edition of 20) were auctioned to raise funds for conservation, others were sold. Only a last few remain. 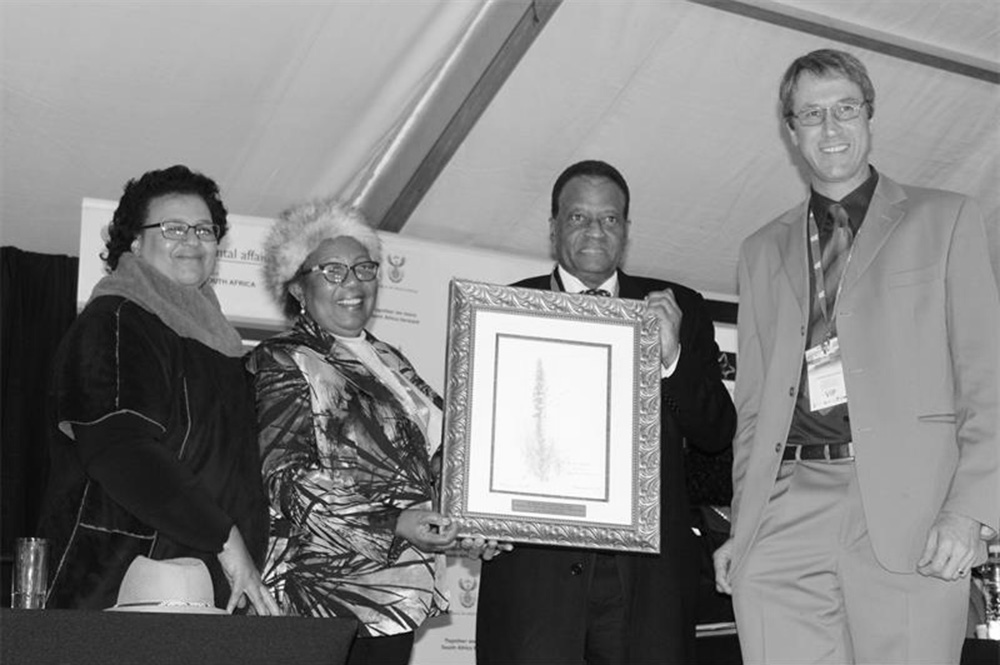 Handover of the illustration to the Sisulu family. [Photo: SANBI]

The facts and events surrounding the life of the Albertina Sisulu Orchid turned out to be a beautiful, delicately woven tapestry, one into which a fibre of my being has been threaded. What an honour for my art to be associated with this name and this resolute and admired woman of South Africa. It is a story that for me presents the hope and consequent victory that can be achieved by small efforts, one that shows that pursuing of one’s passion might just become a meaningful coincidence that fits into a much bigger narrative.

Bishop, J. 2020. National Women’s Day: It all started with a march. https://imstaying.co.za/national-womens-day-it-all-started-with-a-march/. Accessed on 27 August 2020.